Four channels of mixing, real slip mats and vinyl, motorized platters, and a full array of touch-activated knobs and filters and velocity-sensitive performance pads—NS7II is the most responsive DJ console ever created. Nearly every inch is filled with controls that come to life, reacting to your touch and illuminating in response to your style. You get unprecedented visual feedback, ultra-tight control via high-resolution MIDI, and the most comprehensive integration with Serato DJ available. Powerful, cutting-edge technologies blend together perfectly to give you unmatched mixing capability in a rugged, all-metal design that’s born to perform.

The Feel of Real

With NS7II, you can have the best of both worlds. The art of mixing was born on vinyl, and with NS7II that’s where it remains. Like NS7, NS7II has two genuine seven-inch motorized platters, and both are supported by ultra-high-resolution MIDI—3600 ticks per rotation. You also have your choice of high- or low-torque platter settings. When it comes to feel, response, and high-performance mixing, it doesn’t get any better. NS7II gives you the unmatched precision and feel of true analog platters combined with all of the conveniences of your digital music library.

The heart of music production for decades, Akai Professional’s legendary MPC pads are now front and center on NS7II’s dynamic performance decks. Each pad is multicolor, velocity-sensitive, and instantly switchable between 10 different modes using the Pad Mode buttons. Loop, cue, roll, sample, and slice all with effortless agility and speed while the pads light up in response and give you instant visual feedback. Go beyond mixing and effects to produce in real time, creating new music on the fly and remixing with a depth and musicality never before possible.

The world's first and only DJ controller with touch-sensitive knobs, NS7II places an interactive playground at your fingertips. In addition to Numark’s exclusive Strip Search technology, NS7II has filter, effects, and EQ knobs that are intelligent, responding instantaneously to your touch, giving you capabilities you haven’t even imagined ... yet. Perform instant frequency kills, spontaneously combine filters with effects, and more. It’s mixing that is truly interactive and in the moment, making NS7II a live performance instrument built for your creativity and imagination.

Get your hands on the most creative tool for Serato DJ available. NS7II gives you the power to unlock never-before-seen features of Serato DJ through new and innovative hardware controls, including Filter Roll, Filter FX, and Touch FX, which all allow you to control Serato DJ simply by touching an element on NS7II’s control surface. NS7II empowers you with spontaneous performance capability that feels so natural you’ll wonder where you end and the music begins.

Ready for anything, NS7II’s four-channel mixer can operate standalone, which means you can mix up to four external sources without even turning your computer on. Connect and mix CD players, turntables, MP3 players, or any other external source—you never have to worry about the awkward silence and inevitable moans of a unhappy crowd. Plus, the built-in 24-bit audio interface was engineered without compromise, giving NS7II audiophile-grade circuitry that keeps your mix clean and clear.

"...a killer combination of hardware and software
that is unparalleled in the DJ industry" - DJWorx

Down to the finest detail, NS7II is in a category all by itself with features and capabilities that other DJ controllers simply don’t have.

If you want to go pro, don’t go plastic. With its rugged metal body, NS7II crushes the competition, literally. It’s built like a tank.

For the performing DJ, hot cues are simply too important to bury. With dedicated buttons to set and recall, NS7II places comprehensive hot cue control at your fingertips, no digging required.

A first-of-its kind feature that revolutionizes modern DJ performance, NS7II’s effects and EQ knobs are intelligent, responding instantaneously to your touch, giving you capabilities you haven’t even imagined ... yet.

One of the greatest effects you can imagine. By activating Filter Roll, the filter knobs become touch-sensitive and you control a high-/low-pass filter alongside a roll that increases with intensity the more you turn, giving you an instant energy-infusing way to get the crowd moving and leave them breathless. To leave the roll, simply let go of the knob; the filter remains until you’ve turned it back to zero.

One tap of the Shift and Touch buttons and NS7II’s traditional EQ knobs become touch-responsive. Kill the low. Kill the mid. Kill the high. Or kill the entire song, all with your fingertips. All four channels on NS7II feature touch-response EQ knobs, giving you instant on/off control for dynamic creative flourishes whenever inspiration strikes.

With one tap of the Filter FX button, each of NS7II’s four filter knobs commands both its filter and an effect of your choice. Turning the knobs will engage a high-/low-pass filter plus the effect, and both the filter and effect increase or decrease in intensity as you turn the knob.

To add an effect, touch the knob. It’s that easy. To adjust the effect, turn the knob. It’s never been easier to interact with your mix. NS7II empowers you with spontaneous performance capability that feels so natural, you’ll wonder where you end and the music begins. 12 Isotope effects to choose from, 2 effects banks per channel, 3 effects per bank, 6 effects simultaneously on any channel.

For decades, Akai Professional’s MPC pads have been the go-to for performance and production with an unmatched percussive feel and response. NS7II gives you expanded live performance capability with 16 MPC pads—each has classic MPC feel, plus they’ve been updated with RGB illumination, so you have instant visual feedback of what mode you’re in.

No guessing. No vague mono-color flashing. NS7II’s 16 multicolor pads tell you exactly—and instantly—what mode you’re in, so you can spend your time mixing instead of decoding.

NS7II’s direct drive platters let you start and stop tracks instantly, or you can use the new Start time and Stop Time controls. Another creative tool in your arsenal, this attention-grabbing feature lets you ramp up or ramp down the platters, perfect for getting the the night started or bringing it to a classic close.

Whether you have 1,000 songs or 10,000 songs, NS7II gives you total command over your music library with dedicated controls that keep your hands off the mouse and your mind in the mix.

Easily accessible, the Pitch Bend and Tempo controls are exactly where you need them to be with nothing in the way. You'll never graze a slider or button by accident with NS7II's fool-proof layout.

Mixing in the dark is easy. Every crucial function on NS7II gives you visual feedback, including the Tempo faders, which have a red LED at 0, so you can be 100% sure—instantly—when the fader is back to center.

When you want crush, crash, sweep, or surge the entire mix, the Master FX button puts the power in your hands. Apply your effects across all four channels and hang on for the ride.

With NS7II, beatmatching is visual, quick, and obvious. You never have to look at your computer again to match BPM.

Surrounded with a healthy border of seamless and smooth metal, the replaceable CP-Pro crossfader lets you cut and crab with precision—there are no screws or seams to scrape your knuckles on.

With NS7II, critical capabilities have dedicated controls—they’re not buried and don’t require you to use modifiers or spend time accessing submenus. The Bleep/Reverse switch is solid and spring-loaded, so it returns to center automatically.

"I tried to find something from a quality perspective
that I was unhappy with, and failed." - DJWorx

NS7II picks up where NS7 left off, breaking the boundaries of modern mixing, giving you creative performance capabilities that have never existed before, and expanding upon NS7’s dynamic design. 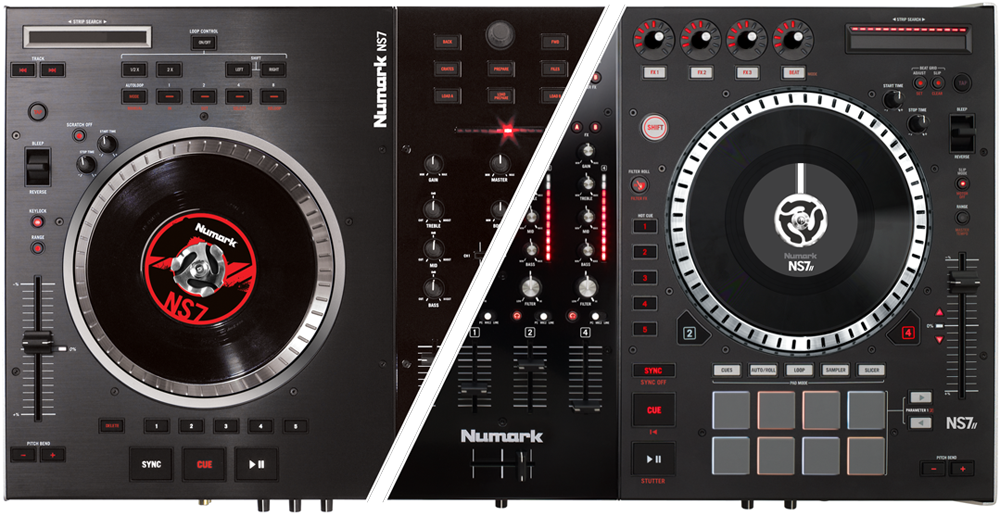 Learn even more about the NS7II at it's official product page.

SPECS AND MORE FIND A DEALER